I’m not one for doing reports or blogs on swims but I was so delighted about doing this swim and enjoyed it so much I felt I had to share it with other swimmers.  Lanzarote is a beautiful place and If you’re in this part of the world it’s a great swim with lots going for it.

When you lose your drive to do what you love it can sometimes be confusing and leaves you asking did you really love doing it?

After a great summer of epic swims, my right shoulder had been giving me a lot of hassle. I had to stop swimming to give it a rest and to get the treatment that took a lot of time. I decided to take a holiday to Lanzarote for some sun. Since I finished the North Channel in August this I had not really been in the open water except for some winter swims. During the first few days of our holiday I swam in the sea and almost immediately I found what I had lost – my love for the open water but most of all the sea. After a few swims along the coast of Lanzarote passing nice beaches and cliffs, I was enjoying the rhythm and the energy I got from the ocean. I got out of the water after a class swims up the coast of Lanzarote and I knew I was back in business.

That evening relaxing by the pool looking out to the ocean, I could see a small island in the distance. I wondered where it was and learned that it was
Fuerteventura.  It was so close it looked like a mirage from the poolside.  The cogs in my mind started moving. If you see it you can swim it.

After some research, I learned of a race called the B15K. I had four days left of my trip and if I was to complete the swim I had two days to work the magic. I set off to find a pilot at the port of Playa Blanca. The same departure port for the two large ferries to and from Fuerteventura. I asked around the port and talked to some of the local fishermen. We got some weird looks when asking “I’m looking for an escort boat from here to Fuerteventura”? each man pointed at the ferry. When I added “I’m looking to swim over” I got the look of disbelief.

I learned of a man called Carlos who was based at a small dwelling at the side of the harbor.  The sign on the door said ‘back in one hour’Good thing come to those who wait. Within the hour as true to his word he returned. I put my hand out and said are you Carlos? We chatted about the swim and he was a willing pilot.  He was calm and relaxed in his nature which I liked.  It felt reassuring and I knew this would be a great adventure.

We discussed tides currents and sea conditions before we knew it the deal was done: return in two days Wednesday 12th Februaryswim start 0730.  I knew I have been out of real training for some time and just getting over my shoulder injury but it all felt right my gut was saying “it’s ok” “life’s for living” “the waters warm” and besides I might never be back here.  The distance calculated was to be about 15k [14.7].

I found a shop called Nutricion Canarias where I bought a fantastic carbohydrate supplement for feeding with the help of the staff.  Before I knew it the 12th morning had arrived and I was bound for Playa Blanca.

I met Carlos at the harbour and on to the boat we went.  We talked on the way to the start point about how I visualized the swim would go and what was going to happen regarding swim pace and feeding. Carlos was the right man for the job. No hassle and calm. Currents and ferry routes led us to Punta del Papagayo on Lanzarote as the start point  As I prepared to Carlos said “neoprene” as he pointed to my bag. I said “no neoprene” to which he replied “maybe 16°c”, I said “just nice” and with that, I jumped in laughing.  I swam to the rocks at Punta del Papagayo and stood up for the start.

The water was class, crystal clear and just the right temperature for a good swim. Swim start was8.13am and almost immediately I got into a good rhythm. I’m far from the fastest swimmer but slow and steady wins my race.  The first hour came very fast and with that was my first feed. All the feeds were made up into 125ml bottles feed every ½ an hour and a plan for 5 hours swim with some extra feeds just in case things didn’t go to plan. I had hoped to have the swim well over in 5hoursplan for the unexpected and hope for the best. The Lanzarote side of the swim was pretty calm and pleasant.  The wind coming from the South East which would build as the day would go, peaking at 11:00.As the morning went on I felt strong and could hear my mind saying “look after those shoulders and don’t go mad”.   The Halfway point was the center of the Bocaina Strait and I had been going at a good pace.  I looked back to Punta del Papagayo I could see the progress. It felt good. I could see Lobos island coming closer but the closer we got the rougher the sea became. As Lobos island came up on our left the progress slowed and almost to a stop at one stage. I could see this quite clear the island was not going past too fast. The current was coming around the Island and we had been fighting the head-on current. It took us 1hour 30 minutes to get past Lobos Island and out of the grip of the current. For 2k I played a great mental battle and this was great training for my mind. I could feel the grip of the current loosening and we started to make progress and my north channel swim helped my patience.

As we approached Corralejo, Fuerteventura there was a ferry that looked like it would leave at any time. Carlos had been keeping an eye on them saying we needed to make our way to the green lighthouse. I had to pick up my speed to get in before the ferry left the port or Carlos would have had to take me from the water until it passed. I made it to the harbour wall of Corralejo. The swim took 5hours 1minute. My two shoulders held up well and I felt great. I jumped on to the boat.  The boat trip back to Playa Blanca was pretty rough but it only took 20 minutes a big bit less than the outward journey. It was so good to be back in the place I loved - The Sea.

This is a great winter training swim for any long-distance swimmer it has the currents, changing sea conditions.  Organize it, and with a great pilot, a good swim plan, feeding regime, a good team, and the warmer waters you a great day out.  Carlos was the right man for the job and was delighted I had made it safe to Corralejo Fuerteventura is no neoprene! 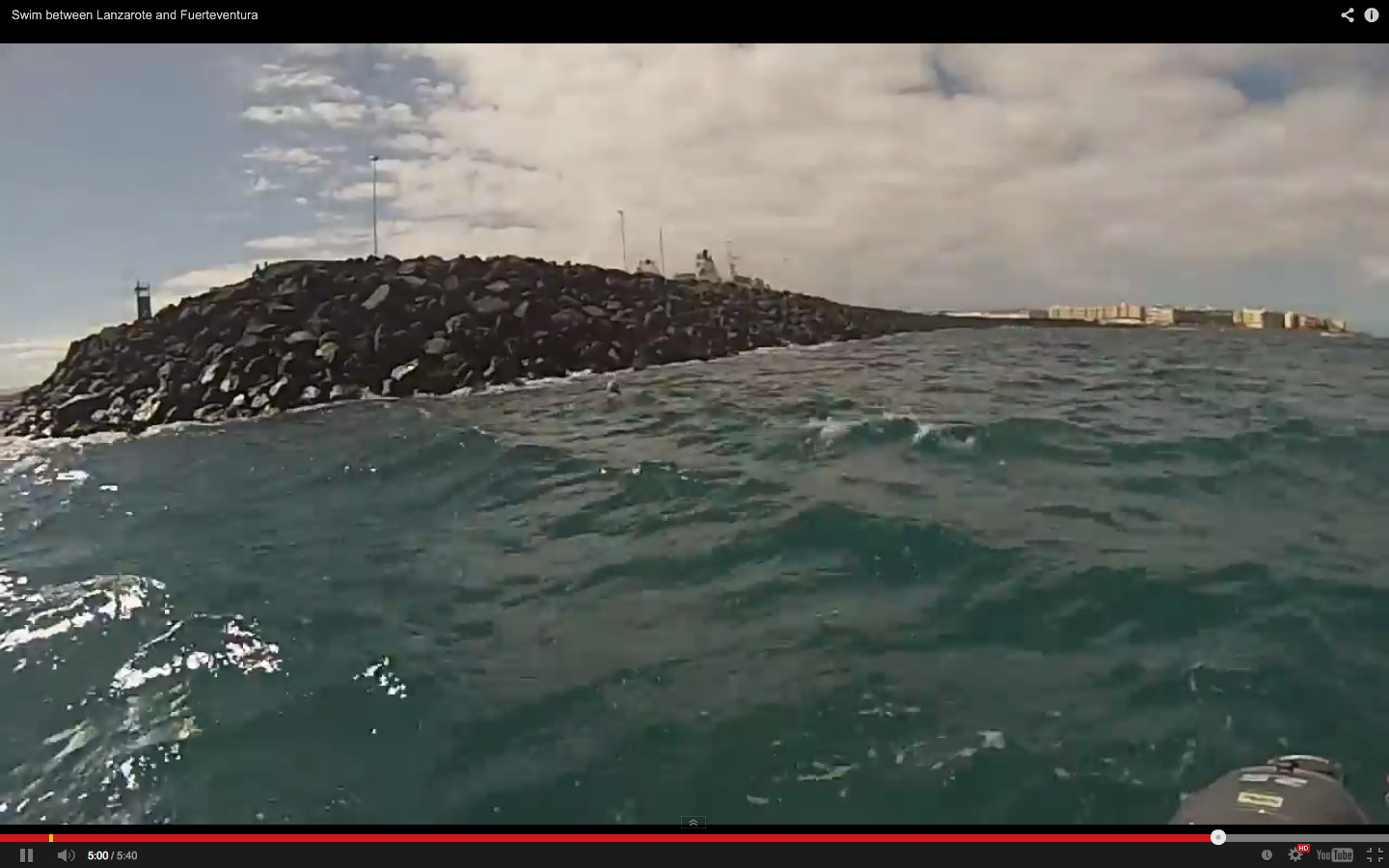 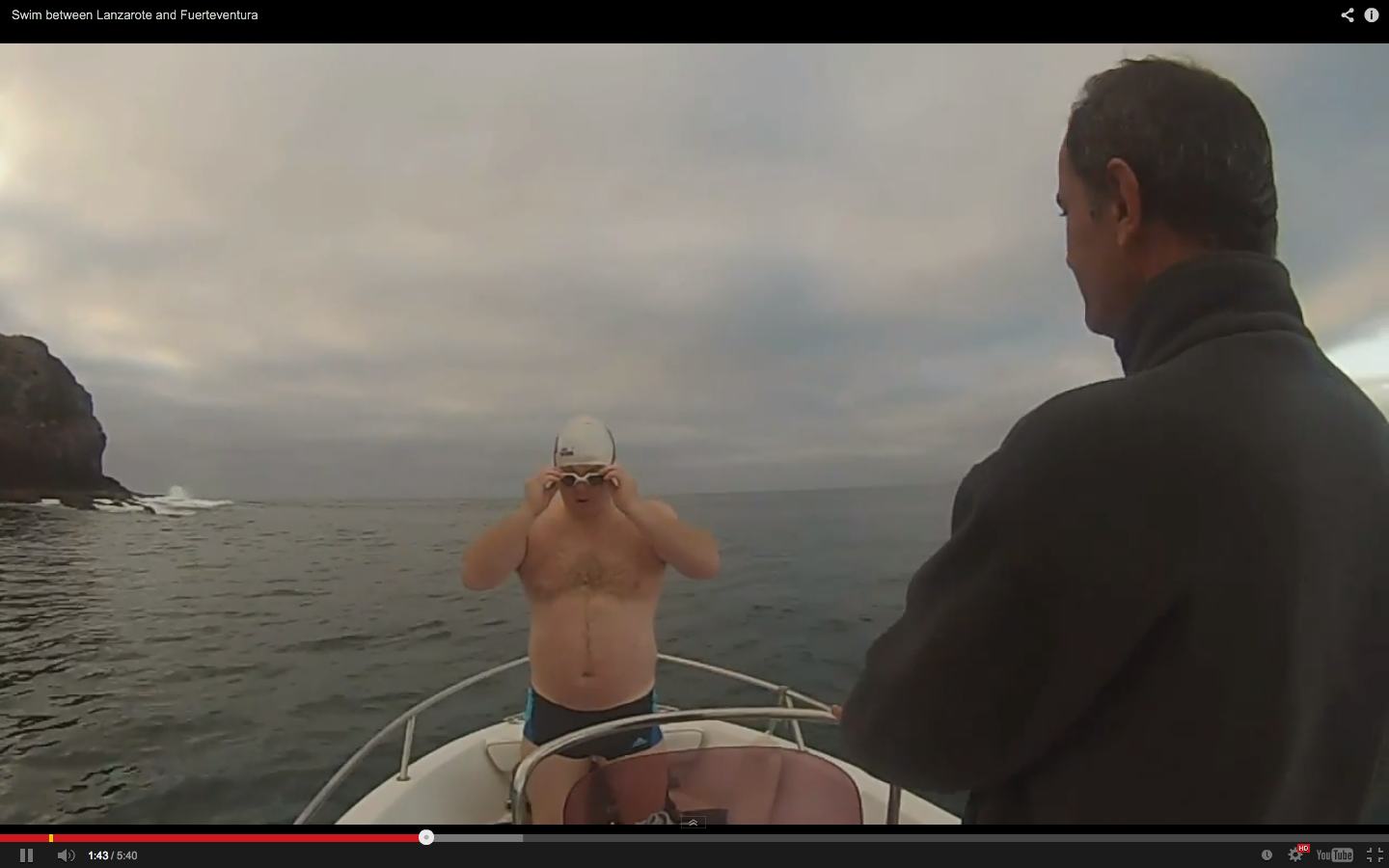 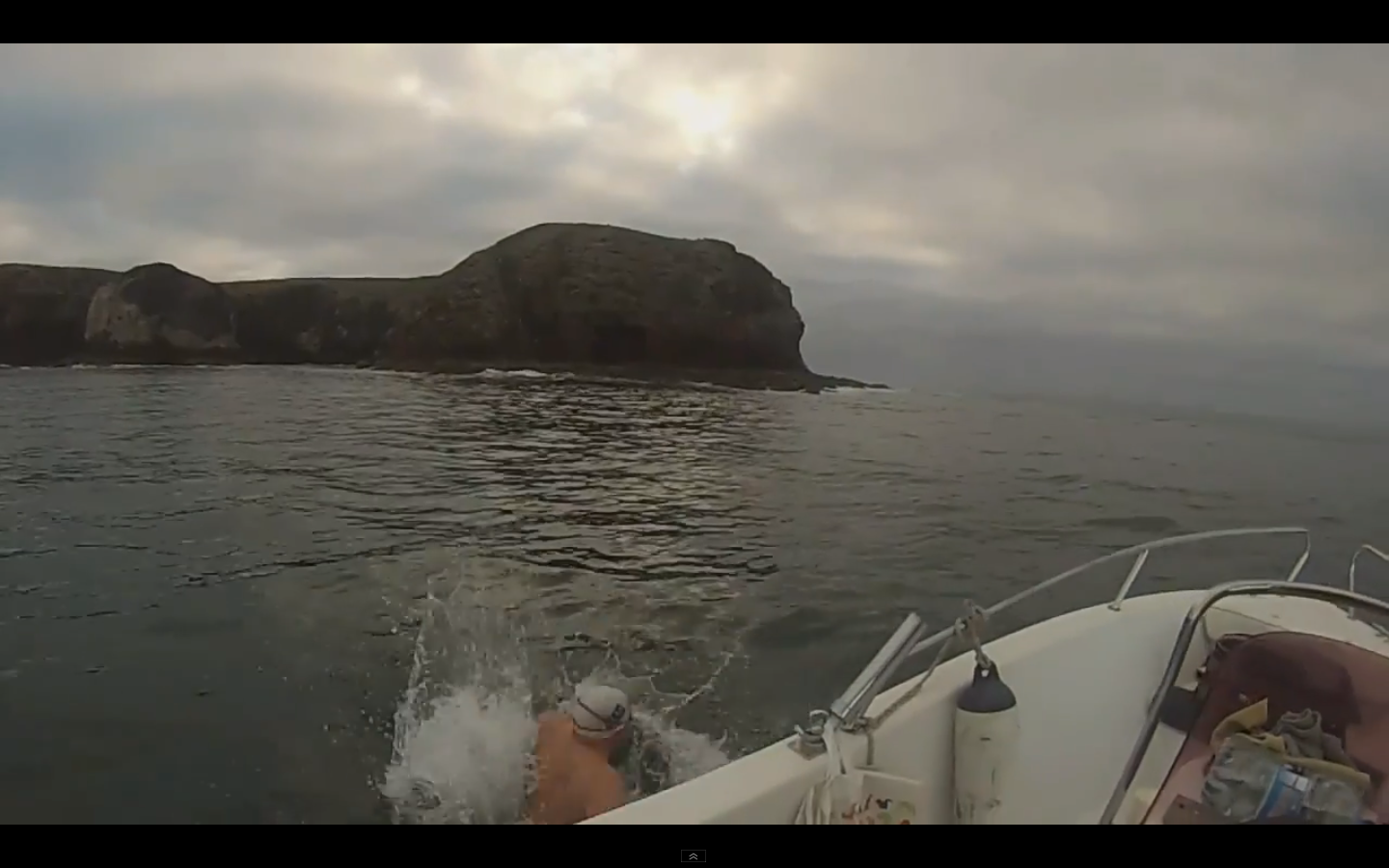 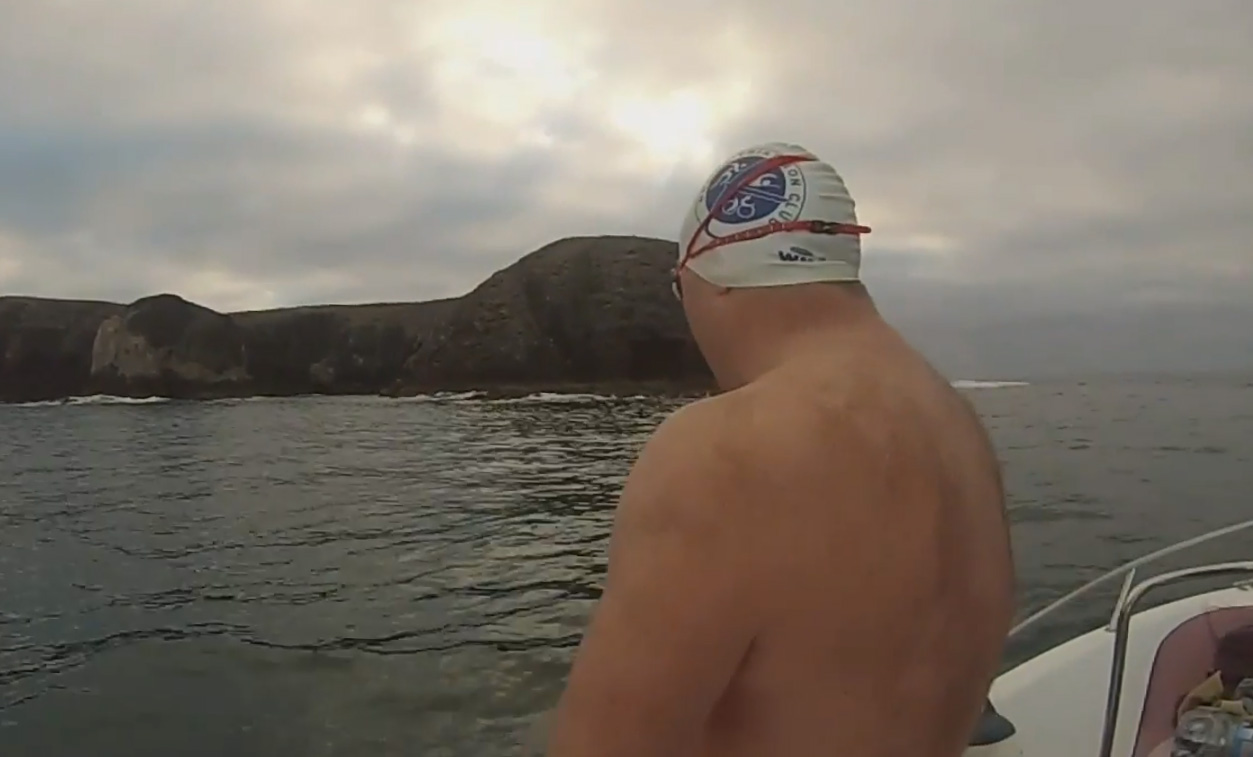