La Bocaina Strait – Lanzarote to Fuerteventura in the Canary Islands off North West Coast of Africa.

Attempted a double-crossing but was called by the pilot after 9 hours at halfway mark on the return second lap. Poor conditions escalated with current, tide and wind gusts of up to 35 knots - no progress was made for 90 minutes and even pushed back at times.

The week before, severe winds from storm Ali lashed the UK ending my planned Bristol Channel splash from England to Wales. Feeling déjà vu with Hurricane Ophelia the same time last year, Bristol eluded me yet again! With destructive winds and angry seas crashing over the lighthouse in Porthcawl, my intended landing spot around the corner at Sandy Beach was a sea of violent waves.

The wonderful Jacqueline from Ireland had taken a week’s holiday from her busy schedule as an ENT specialist to help crew for me. What a great friend! With her Infinity cap on, she flew to Wales Saturday only to be greeted with the bad news that the Bristol swim had been called off. What does one do then? Well, Jacqueline jumps a flight to Nepal and goes to Pema Ts’al Monastery where ‘Infinity’ teaches young monks how to swim. Her second visit this year done in her own free time and goodwill - what a wonderful selfless thing to do, teaching the skill and joy of swimming to the children of Napal.

Still hoping the weather would change for the Bristol Channel, Jacqueline flew back to Wales from Nepal later that week but the conditions deteriorated even further. After meeting Jacqueline at the airport a plan was hatched for an alternate swim with Padraig Mallon (Mr. Infinity !) on the phone back in Northern Ireland. The UK was stormed out so no options there, but Padraig came up with the idea of a double La Bocaina crossing. Flying by the seat of our pants the new plan was executed in the Cardiff Airport car park - Jacqueline was Commander in Chief and booked flights & accommodation, Padraig organized a mate to pilot us across, and Milo would fly from Dublin to Lanzarote to meet us the following morning to crew with Jacqueline for my swim.

Having settled in Lanzarote by lunch on Thursday with Jacqueline & Milo we received the first but not the last piece of challenging news. Our pilot had fallen ill and wouldn’t be able to take us across. His boat was called ‘Something Fishy’, so there may be something in that! No problem……..Jacqueline and Padraig worked the phones to secure another pilot and by late afternoon Carlos our new man was locked and loaded………..or so we thought. On the way to dinner that evening, before the mornings swim, Jacqueline receives a call advising there was a serious mechanical failure with the boat putting it out of action for the entire weekend. Dinner delayed while we went to the harbour to befriend local boat owners to see if anyone could take us across. No luck other than getting a number for a different Carlos who could only take us on a one way swim the next day - he had a spot for a double-crossing on Saturday but flying back to Australia Sunday was cutting it fine. Never a dull moment and still flying by the seat of our pants we digested where we were at over a late dinner – Spanish style. Jacqueline on the phone again worked her magic and secured yet another boat for a two-way crossing in the morning! What a ride! Love it when a plan comes together…….in 24 hours.

Our last-minute pilot Rene Van Leeuven was brilliant – he had never taken anyone across for a single crossing let alone a double but knew we were in very capable hands along with Mike Robson Salmon who crewed the rib with Milo. We were told a two-way crossing had only ever been done once before by a local Arthur. We were given Arthur’s number by our Airbnb host (that’s how it rolled). Arthur was very helpful, advising marker points to watch out for, over and back. For his swim the water temperature was perfect but Arthur wore a wetsuit due to the abundance of jellyfish. He also mentioned that he and his crew spent 12 months organizing logistics to ensure the best conditions and tides - we jumbled it all together in less than 24hrs and took chances with conditions and tides! Anything was better than not swimming after the Bristol Channel swim was canceled. Unfortunately, we didn’t get to meet Arthur with the fly in fly out nature of our swim - hope to grab a beer one day if I return to this magic island with its beautiful people and superb food.

The swim morning couldn’t have started better. Slightly overcast conditions with a hint of sun wrestling through clouds to pierce the crystal clear water. The water temp was perfect and air temp 22 degrees. Conditions for most of the first crossing were great only with the last ¼ seeing the swell and wind picking up from behind. About 100m offshore waves broke consistently over a slippery rocky bottom which made exiting challenging to say the least. I love and live for the surf, but trying to stand on slippery rocks with strong waves breaking behind you and your legs a little wobbly after 4.5 hours in the water, doesn’t make for the most elegant of exits. Having stood up once just below waist height, looking like a drunken sailor and being dumped unceremoniously onto the rocks, dignity went out the door as I went reptile. Using my arms and legs like a komodo dragon I exited the water.

With two way crossings, the English Channel rules allow for 10 minutes on shore to regroup before starting the second leg - we abided by these rules. Moreover, with conditions and swell picking up I wanted to get underway as quickly as possible for the return leg and started the second leg of the swim after 2 minutes 30 secs onshore. Assuming komodo dragon position again I returned to the ocean to negotiate waves breaking in shallow rocky waters.

It was comforting to have Jacqueline crewing on the main boat and Milo the ever-steady & guiding hand close by on the rib. As conditions deteriorated I actually enjoyed it more and more, feeling stronger and stronger as I worked solidly head-on into 25-knot winds, building up to gusts of 35 knots by the time we reached halfway. Many a time I saw the rib launch skywards over the swell or being hit by breaking waves. A number of times Milo watched me disappear under the odd broken wave or two. She became an ugly unruly ocean with Milo recounting he swallowed “2 pints of seawater in me’ and Mike on watch yelling to Milo turn and cop the wave on the full! Even in these conditions Milo was unwavering and never took his eyes off me. I’ve been lucky to have Milo crew for me on other swims. A great comfort having his incredible experience out there with you whatever the conditions. An ironman himself in every sense of the word - he even completed the Lanzarote ironman with its tortuous volcanic hills - I can’t imagine how they ride up and down those hills at terminal velocity. Milo is one of life’s great characters and great men.

At the halfway point of the second lap I knew progress was going to be slow even though I felt strong, but I didn’t appreciate just how little progress was made until Captain Renee called the swim. I had been swimming on the spot or going backward without realizing it or 90 minutes. When I say swimming on the spot, I don’t think I have ever laughed so hard after a swim than when viewing the tracker over that 90 minutes. It looked more like a bike ride through the Pyrenees in the Tour de France, going every which way but forward, doubling back on myself and crisscrossing! Priceless! No swimmer ever wants to get out, but when I saw Jacqueline give me the cut-throat sign that the swim was over, I knew there was no arguing and that she wouldn’t do it lightly knowing our swimming history. When I was pulled on the rib for the remaining half of the journey home I realized just how bad things had turned, and like Milo, I reckon I swallowed a couple of pints of seawater on the way back.

What a wonderful adventure shared with my very special Infinity friends who flew all the way from Ireland just to crew for me. I am forever grateful and indebted for their generosity. A special team indeed they are.

Very happy to have swum La BocainaStarit following in Padraig’s shoes some years earlier. The double-crossing wasn’t meant to be, but it was a great 9.00 hour hit out – a one and a half crossing I will take every day of the week. Having 4.5 hours for the first lap and a matching 4.5 hours for only halfway on the return, gives some perspective of the changed conditions. Mother nature rules and Poseidon always has the last say.

Finished with a fantastic dinner celebration with Jacqueline & Milo on the water at Brisa Marina where they spoiled us with local seafood and too many complimentary rums.

I thoroughly recommend this swim for those so minded. I also discovered they hold the ‘Traversia La Bocaina’ which is an annual 15km open water swim across the strait, which was held only a few weeks before my solo crossing. 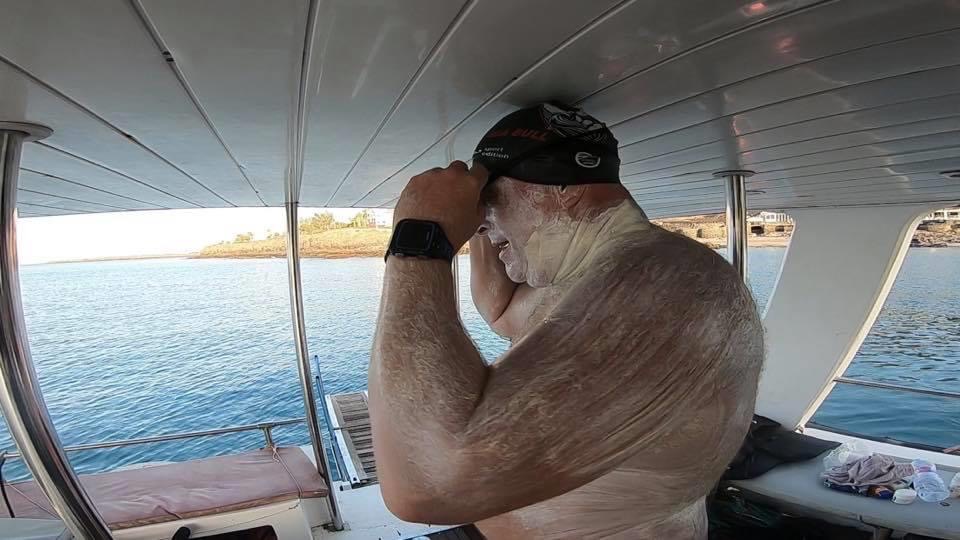 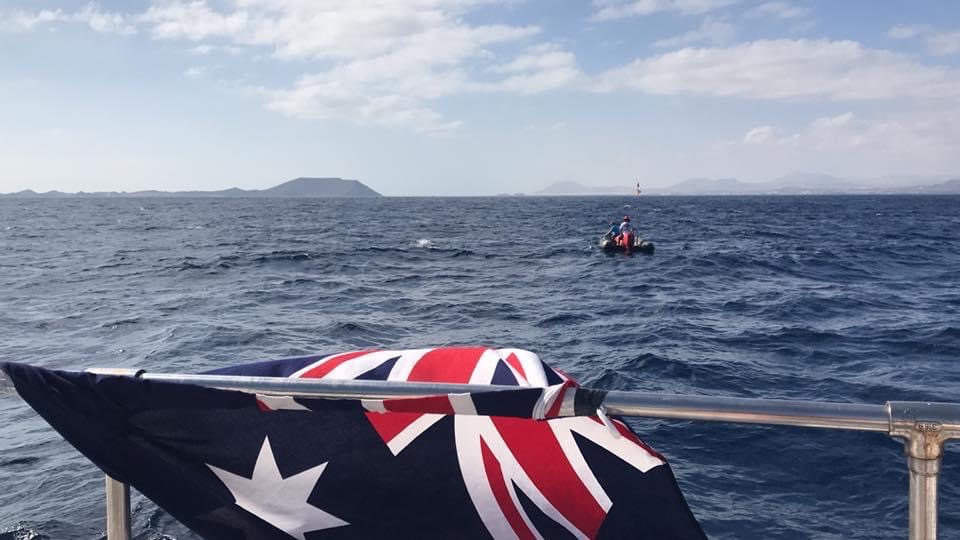 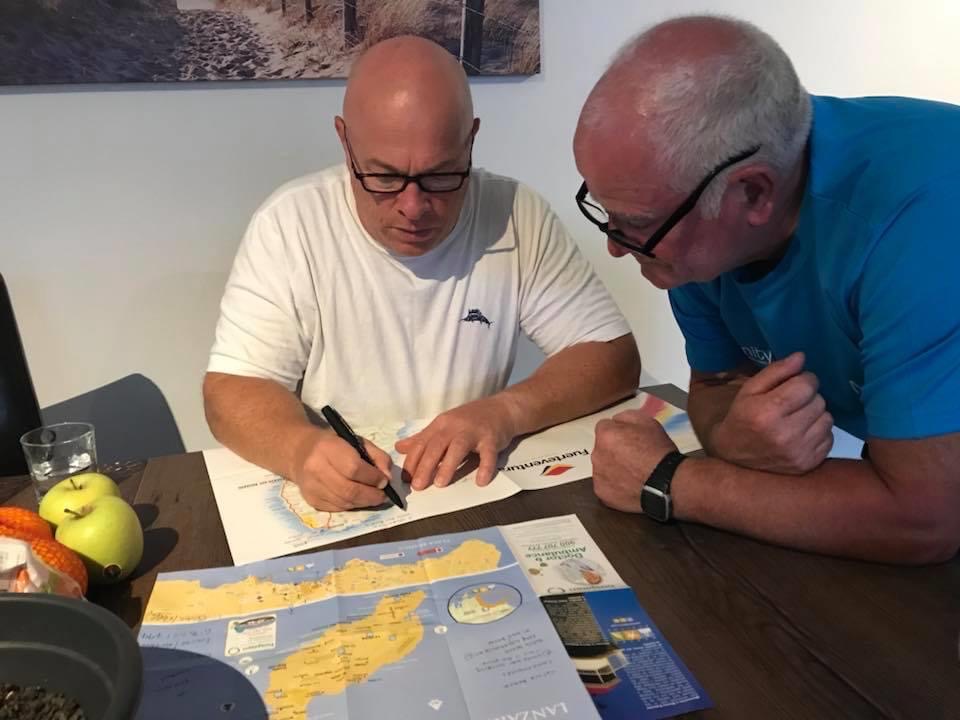 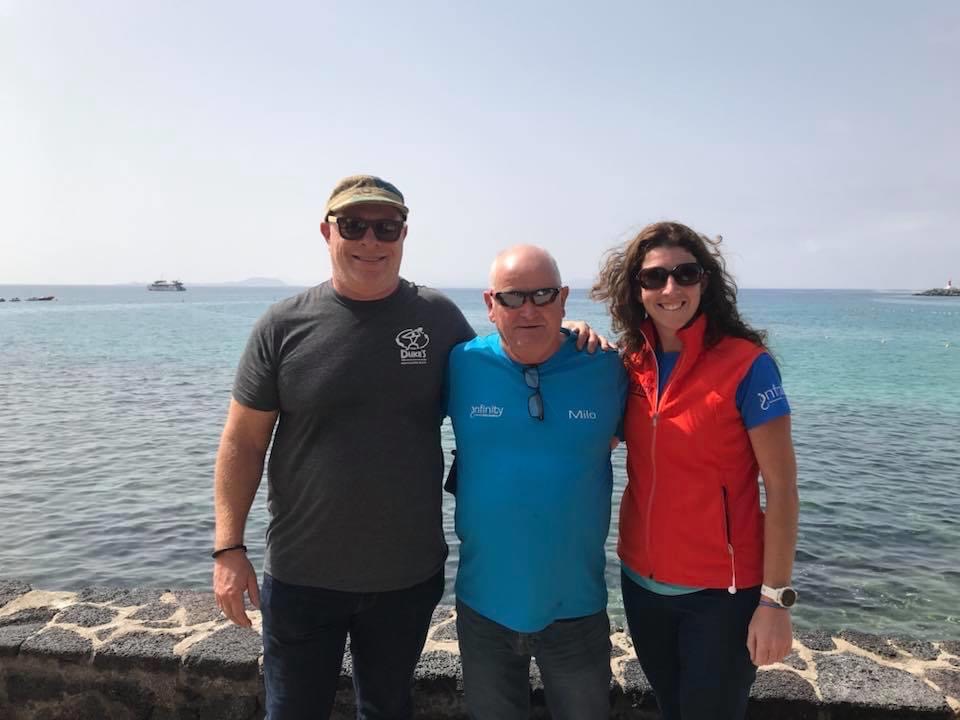 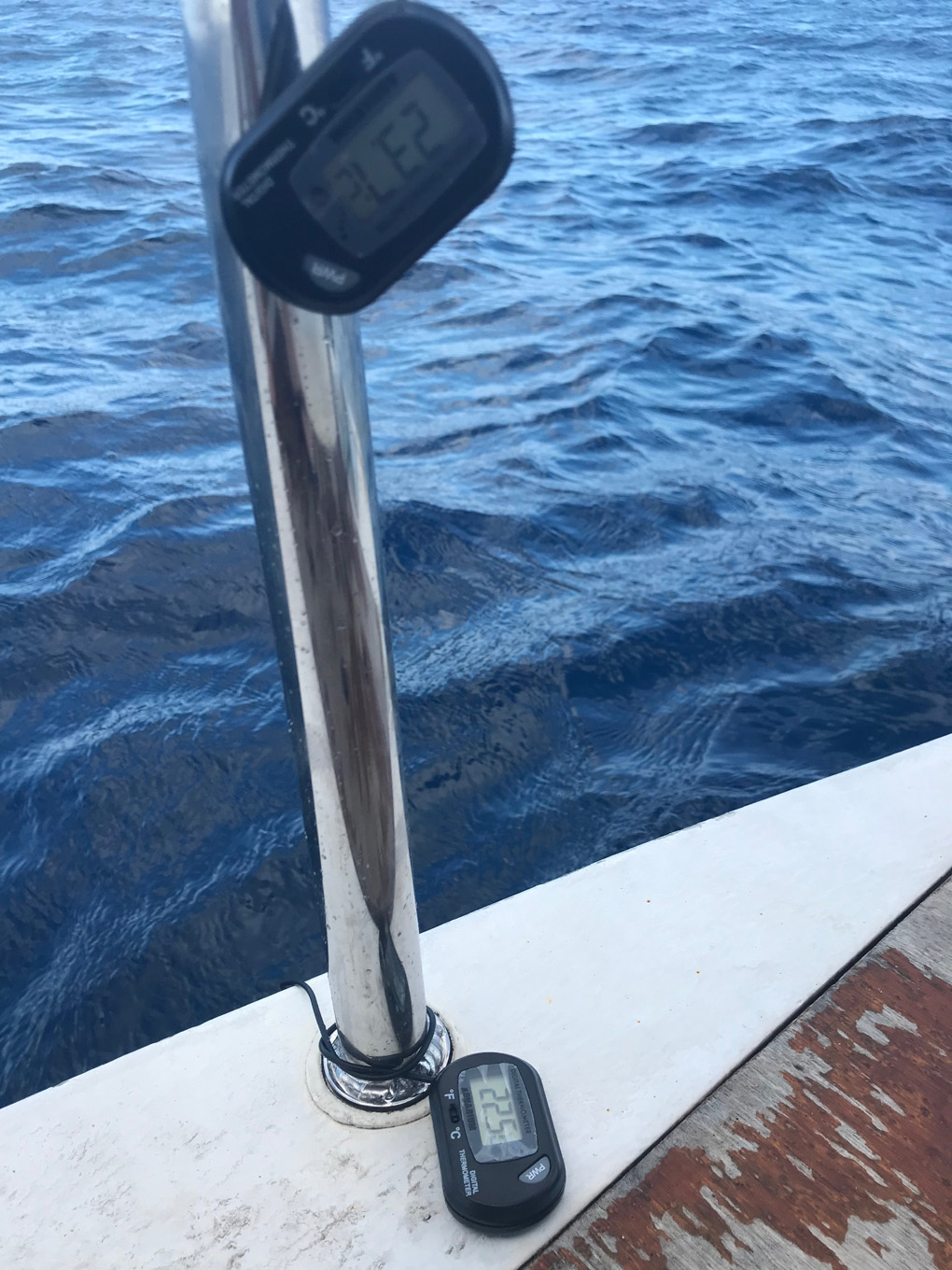 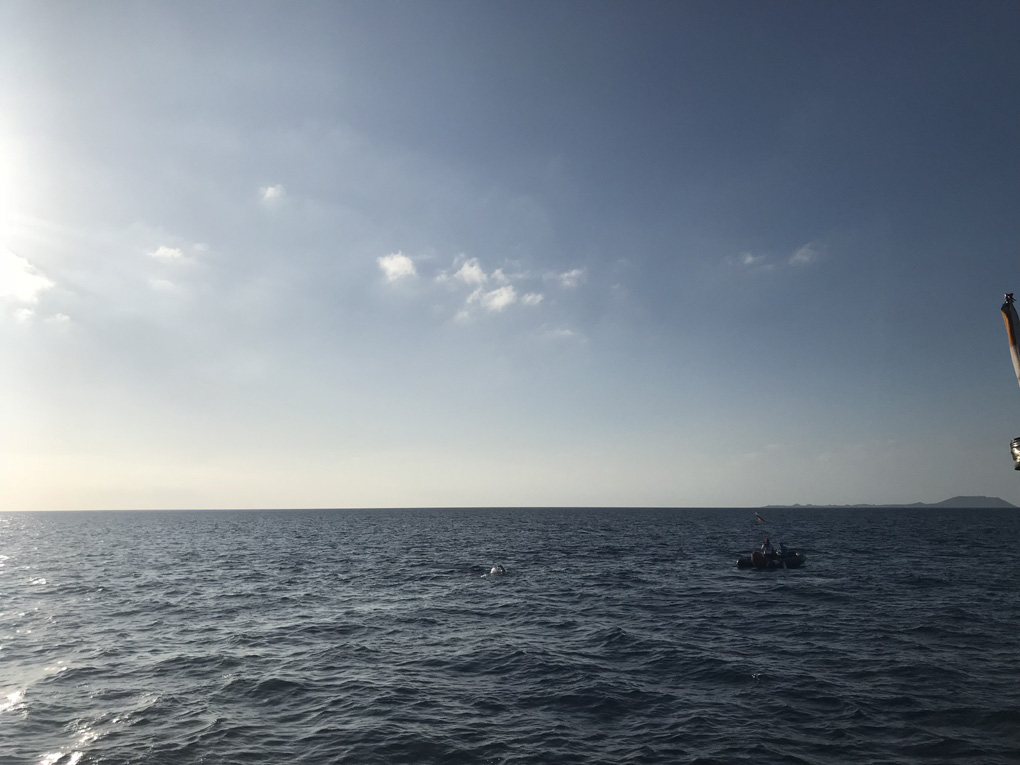 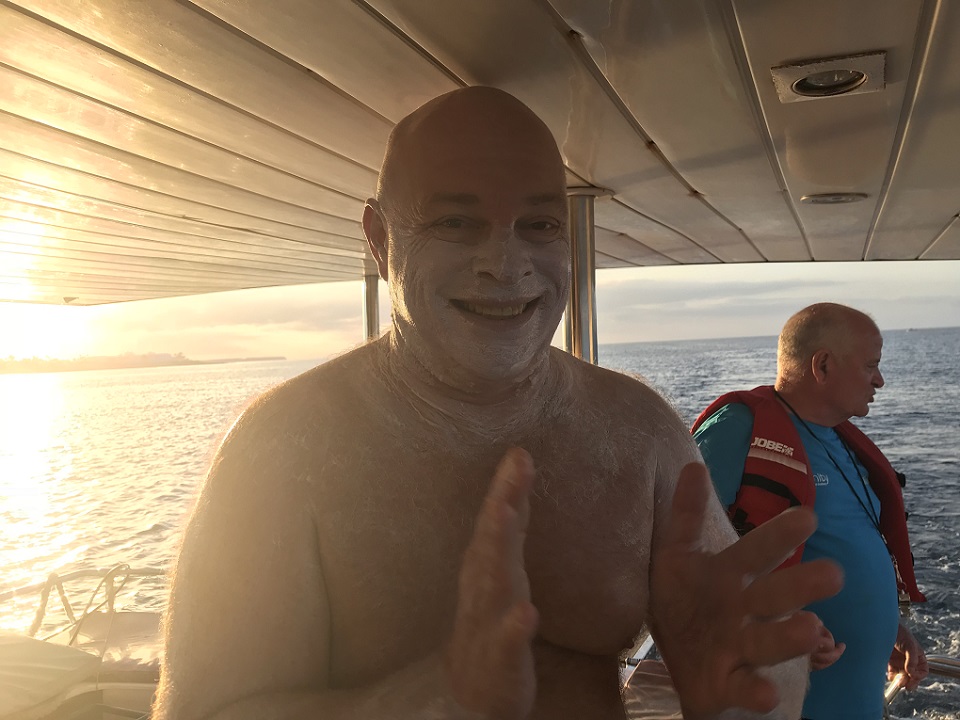